What is a Corporate Power Purchase Agreement?

Corporate Power Purchase Agreements (Corporate PPAs) are long-term contracts between the owner of a renewable energy plant (RE plant) and the end-consuming Off-taker for the delivery of 100% green electricity and the corresponding Energy Attribute Certificates (EAC).

The electricity can be delivered virtually (Virtual PPA) or physically (Physical PPA). The delivery can also be realized through a direct-cable-connection between RE plant and electricity-consuming asset (On-Site PPA) or via public grids (Sleeved PPA).

These contracts are the best option for corporates to fulfill their climate targets. However, they are more complex to structure, are not available in every energy market, and some types may induce adverse effects on the Off-taker's balance sheet. 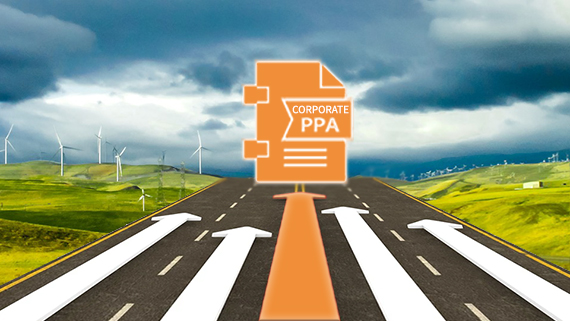 Corporate Power Purchase Agreements (PPA or CPPA) are defined as direct agreements between an electricity-consuming corporate (so-called “Corporate Offtaker”) and a Special Purpose Vehicle (SPV) holding the renewable energy assets and which is owned by a developer or independent power producer (IPP).

Besides delivering renewable energy, these agreements also provide Energy Attribute Certificates proving the origin for every contracted MWh from a specific plant under the PPA. The EAC price is commonly bundled in the total PPA price.

What kind of different Corporate PPA types are available?

Onsite PPA – Basic Structure   Source: Think RE GmbH, © Think RE GmbH
Onsite PPAs are characterized by a direct cable connection between the electricity-consuming entity and the renewable power plant. The graph shows a corporate PPA situation contracted with a Special Purpose Vehicle (SPV) not owned by the Off-taker itself since otherwise there would be no Corporate PPA. Still, only an Intercompany PPA closed for accounting reasons.
The SPV owner has typically to rent the site for the entire project lifetime. The agreed PPA price does not include grid fees, making Onsite PPAs typically cheaper to comparable volumes delivered over grid-based solutions. However, since the plant is not connected to the public grid and is outside of the transmission system operator's responsibility, there are usually no Energy Attribute Certificates delivered to the Off-taker. The Off-taker very often must treat these PPAs as leasing contracts (e.g., under IFRS 10) incorporate accounting since the Off-taker usually is proactively involved in the development process of the renewable energy asset.

‍
Therefore, Onsite PPAs induce the risk that the PPA might affect the Off-taker's balance sheet and corresponding financing covenants. Onsite PPAs were by far the most contracted Corporate PPA category in the last decade. However, their application remains limited due to the scarcity of qualified sites. Consequently, larger volumes are commonly acquired under Offsite PPAs, which became the predominant Corporate PPA category in installing renewable energy capacity.

Offsite PPAs are defined as direct agreements between a developer or independent power producer and the Corporate Offtaker using the grid. Therefore, it balances responsible parties for transporting electricity from the supply side to the buy-side. Under these PPAs, the created EACs are allocated from the SPV to the Off-taker. This can be realized based on two fundamental Offsite PPA types: Physical PPAs that include the physical delivery of renewable electricity and Virtual PPAs, which are only a financial hedge against volatile power market prices.

A Physical PPA is defined as a contract containing the physical delivery of the contracted renewable energy volume delivered by a third party (utility or energy trader) via the public grid. The agreement covers the delivery of a certain fixed or variable amount of renewable energy under a specific PPA price mechanism.

The PPA price typically includes the ECS price, delivered under the Corporate PPA (bundled EAC). The Balancing Responsible Party (utility or energy trader) physically receives the renewable electricity output. In case the responsible balancing party also receives electricity parties other than the SPV (e.g., from fossil fuel plants), it could be the case that the electricity delivered to the Off-taker is "grey" as described in the chapter "Grey Power Markets." 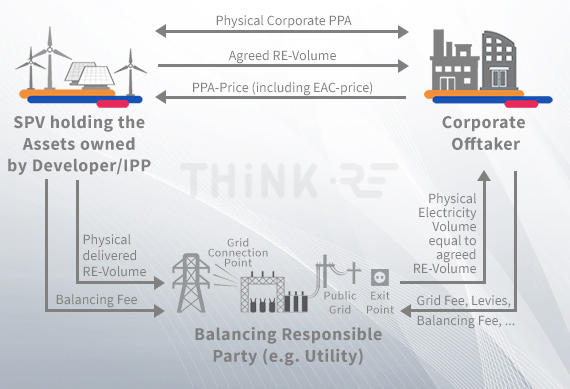 Physical PPA – Basic Structure Source: Think RE GmbH, © Think RE GmbH
However, the sustainability is still proven since the EACs received can track renewable energy's origination back to the specific SPV. The renewable energy plant is often built only because of this agreement, so the Off-taker can directly influence that a new renewable energy asset gets online, fostering the energy transition. Due to the necessity of integrating a Balancing Responsible Party (BRP), there is often a so-called Balancing Agreement closed between the BRP and the PPA counterparts, which covers the exact process of physically delivering electricity. Depending on this contract, only one party or both parties can pay a balancing fee.

In contrast to a Physical PPA, a Virtual PPA does not contain a physical delivery between the SPV and the Off-taker. It is a financial hedge purely based on the electricity price. Consequently, these agreements are commonly only applicable for offsite solutions due to the absence of physical energy delivery. Assume that the electricity price P1 is the current price on the day-ahead market. This market price is used as the underlying of the Virtual PPA, which is called Settlement Price. In addition to defining the settlement price, both parties agree on a so-called strike price that serves as a benchmark and is fixed during a certain period (PPA tenor). There might be three scenarios:
Virtual PPAs are very famous since they are relatively simple in their structure compared to Physical PPAs.
However, things become complicated if the SPV and the Off-taker are located in separate countries or other energy markets. In this case, the settlement price in both countries may differ from each other, which is called Basis Risk and has to be handled by every PPA counterpart.
The described price structure is also known as Contract for Difference (CfD) since the only differences are exchange between the parties. Note that other price mechanisms are applicable under Virtual PPAs such as Floor, Cap, or Collar.
Analogous to the Physical PPA, EACs are delivered under Virtual PPAs as well, and the EAC price is also typically bundled in the strike price. In the last years, especially the number of closed Virtual PPAs strongly increased in various electricity markets since it is a relatively simple but reliable tool for procuring EACs and prove the corresponding climate footprint management. 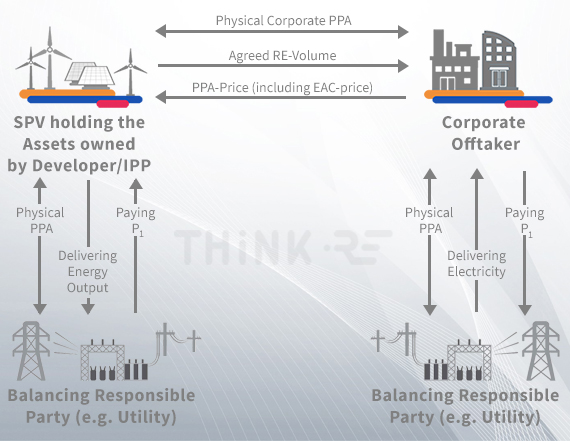 How many EACs are delivered under a PPA depends on the particular volume structure of the PPA, i.e., whether the Off-taker receives a fixed amount of electricity (so-called Fixed Volume PPA) or a variable amount (so-called As Produced PPA). In the case of a Fixed Volume PPA, the number of EACs delivered equals exactly the fixed electricity volume delivered. In case the power plant produces an energy output lower than the contracted fixed volume, the SPV has to buy the outstanding amount of electricity and certificates on the secondary market.
From the Off-taker perspective, a Fixed Volume PPA could be the preferred volume structure most often since it delivers predictable volumes that can be better matched with the own electricity consumption.
However, there are two significant risks inherent with fixed volumes: 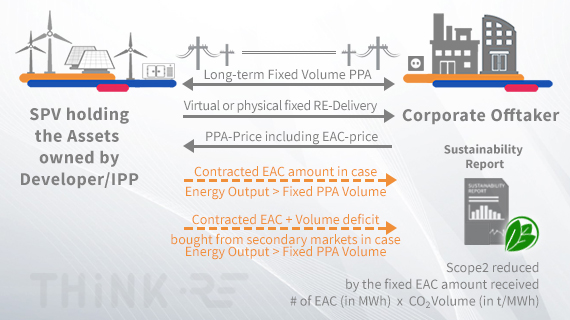 Contrary to the Fixed Volume PPA, the SPV has to deliver all EACs for the output produced in case of an As Produced PPA. The following graphs summarize this relationship for this PPA type, which independent power producers often prefer.

However, the Off-takers bears the risk that the SPV does not deliver the expected energy output. In underproduction, the Off-taker has to purchase the deficit volume to market prices from the intraday electricity market.

Consequently, there are also two significant risks among others inherent with As Produced PPAs: 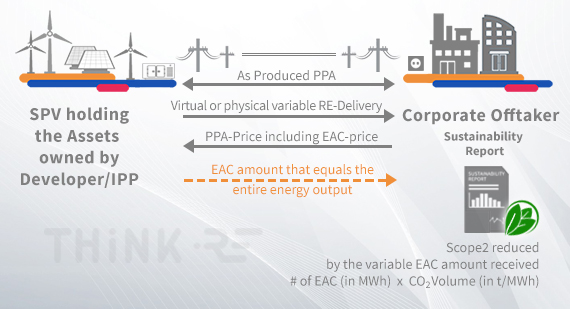 The graph below summarizes the PPA price structure and compares the different PPA types according to volume risks. 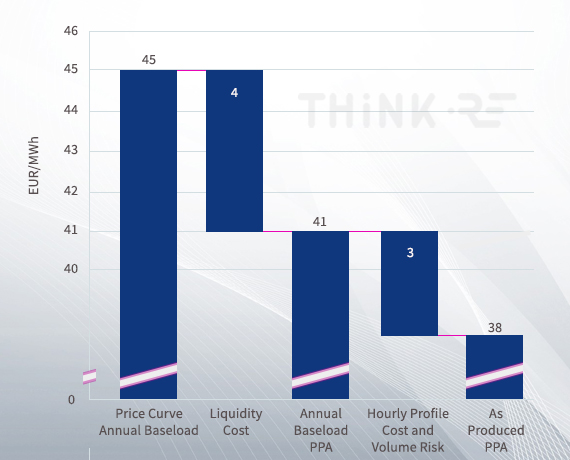 PPA Price Structure    Disclaimer: The prices shown in the table do not imply any acceptance, advise, or endorsement by Think RE GmbH.
The profile costs charged by the SPV for the shape risk are related to buying missing electricity volumes. This deficit induces liabilities that must be financed either by equity or debt capital. In the latter case, the SPV has typically bond lines from which it can draw the necessary liquidity.
For these drawdowns, the banks charge interest rates, which are understood as liquidity costs for buying deficit volumes at market prices. Since the volume risk increases with increasing PPA ticket sizes, the total liquidity costs are rising accordingly. If the liquidity is provided by equity, the liquidity costs can be understood as investors' return rate.
In sum, the main advantage for electricity consumers like corporates or public institutions (e.g., hospitals, universities) is the direct influence on their sustainability and climate strategy. Moreover, the Off-taker can ensure that a new renewable energy plant can get online to the grid solely due to the Off-taker's electricity consumption.
Finally, these contracts may induce a potential for saving electricity costs if they are structured appropriately, and the underlying renewable energy projects show high quality. However, these contracts cannot be realized in every country and are strongly dependent on the availability and quality of available renewable energy projects.
According to the International Renewable Energy Agency (IRENA), the estimated annual amount of renewable energy volume allocated under Corporate PPAs accounts for more than 120, equalling 1.9% of the yearly total renewable energy production.
Corporate PPA markets are continuing to show the most considerable growth rates among the different ways to procure green energy.

Global Overview of Corporate PPAs   Disclaimer: The countries shown in the table do not imply any acceptance, advise, or endorsement by Think RE GmbH.    Source: Think RE GmbH, © Think RE GmbH